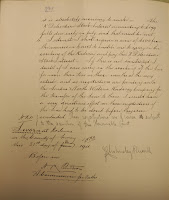 Evidence that the problems of the North Wales Narrow Gauge Railways Company were troubling James C Russell even a year before his death, in this sworn affadavit to the Chancery divison of the High Court. Dated 31st May 1911 it asks the Court permission to release money held by the Court to pay for running expenses and to pay debenture interest. At the end he drops in that there are negotiations taking place to transfer the line to the London & North Western Railway which ultimately proved to be a pipe dream. Most of this is in copper plate script by one assumes a solictor's clerk but JCR has added a line in his own wavering hand writing at the end, perhaps demonstrating his fraility by this time.
Many thanks to Michael Bishop for unearthing this document and for others including Russell (as Receiver) asking the Court to let him spend up to £250 on building the Stationmaster's House at Dinas in 1899, funded by Debentures which were never raised and another in 1914 by his successor Gowrie Aitchison detailing quotes for engine repairs for "Russell" and "Gowrie" funded from Monies in Court.
Posted by NickB at 20:40