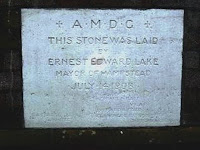 He was born at Highgate, Middlesex, on the 2 March 1844. His father Henry was a partner in the family law firm, Tucker Lake & Lyon of 4 New Court, Lincoln's Inn which Ernest subsequently joined. Ernest had six brothers and two sisters and one of them, Edward became the first managing director of the Greene King Brewery of Bury St. Edmunds, Suffolk. His mother, Mary Lake née Greene was one of thirteen children and a brother Benjamin Buck Greene was a Governor of the Bank of England from 1873 to 1875. Mary was a relative of the novelist Graham Greene.

Lake was one of the original shareholders in The Moel Tryfan Rolling Stock Company Limited set up in 1878, that leased "the Locomotives, Engines, Carriages, Wagons, Trucks and Rolling Stock..." to the North Wales Narrow Gauge Railways Company. Lake later became a director of the NWNR Co.

He was Mayor of Hampstead in 1908 and laid the foundation stone for Hampstead Hill School on Pond Street formerly the old church and community halls. See Ed Fordham's blog of 12 July 2009 at http://474towin.blogspot.com/

Ernest died in Hampstead on 28 September 1917

For more information on the Lake and Greene family see an excellent family history site at http://www.dentongenes.com/
Posted by NickB at 21:47